A step on the path of beauty occurred for me on January 8th.  For on that day, a long cherished idea of introducing Mrs. Ban, the spouse of the Secretary General of the United Nations, to colleagues of mine from the Nakashima Foundation for Peace happened.

And it happened in a place of great beauty, the Metropolitan Museum of Art in New York City.

Trying to coordinate her schedule with the schedule of those who work at George Nakashima’s compound in New Hope, Pa. took quite a bit of time but it was well worth it! 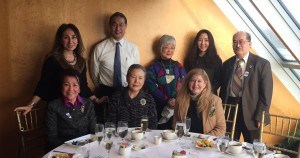 On a very cold – though sunny day – we all gathered, along with two wonderful women: Madame Remedios Fe Cabactulan, the president of the UNDWC and the spouse of Libran Cabactulan, the Philippine Ambassador to the UN and Dr. Nassrin Iromloo Zahedi, a co-president of the Hospitality Committee for United Nations Delegations.  The Ambassador and Madame Cabactulan had visited the compound last May when he spoke about The Very Reverend James Parks Morton, Honorary Chairman of the Nakashima Foundation for Peace.

Mira Nakashima, the daughter of George who is continuing his legacy of woodworking and is the president of the NFP , arrived with her brother, Kevin, who is also on the board, her son Satoru Amagasu and his wife, Soomi, who is of Korean lineage. It was a great joy for both she and Mrs. Ban to converse in their native language and to also discover that a friend of Soomi’s father had mentored Mr. Ban in his early career!

These kinds of personal connections were made throughout the afternoon and by its end, everyone felt a warmth that melted the cold weather.

A very pleasant surprise was that John Carpenter, the curator for the Japanese Galleries could join us also.  Nakashima had been asked to create a reading room with table and chairs for the new gallery.  Barbara Ford who was the curator to oversee these new rooms knew that I was connected with Nakashima and asked me to facilitate an introduction.  Of course, I was happy to expedite this connection.

George built several pieces for this commission between 1986-87.  The room has been a wonderful space in the museum ever since its inception. 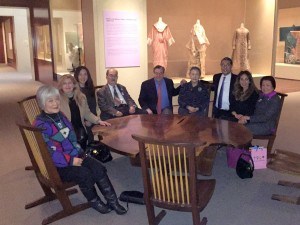 John kindly showed us the very popular kimono exhibition which is stunning.  Then we sat around the table, now placed in the middle of the gallery.  It was brilliant to move it for awhile and has been very appreciated by the crowds of people who visit!

Its new context only highlights the table’s beauty and modernity.