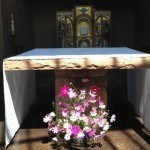 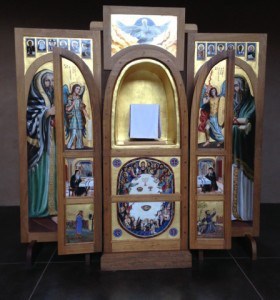 Although Georgia O’Keeffe lived in Abiquiu, the artist who truly mesmerized me there is George Nakashima! He told me that he had often visited O’Keeffe while working on an integrated design project which included both architecture and furnishings.

This is the Monastery of Christ in the Desert which he worked on in 1972. The communal life of the monks reminded him of his stay at the Sri Aurobindo Ashram in the late 1930s and so he did this commission as a donation in remembrance of the monastic vows he had taken in Pondicherry, India.

Being on the Nakashima Foundation for Peace has often taken me to his studio in New Hope, Pa.,  the Peace Altar at the Cathedral of St. John the Divine in NYC and his reading room in The Gallery of the Arts of Japan at the Metropolitan Museum of Art also in NYC. This past February I was in Auroville and the Sri Aurobindo Ashram: the former for the dedication of his Sacred Peace Table in the Hall of Unity and the latter to stay in Golconde, the building he was the architect on from 1937-39 and which many consider to be the first modern building in India. 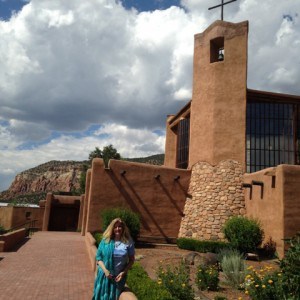 Having seen many of his works and being so close to this one in New Mexico was irresistibly magnetic.

Off my daughter and I went, travelling northwest to Abiquiu quite quickly. Then the trip really became a pilgrimage for once we left the main road, we went another 13 miles on a dirt one, which often became quite narrow. The dirt path reminded me of the early days in Auroville.

But as we went deeper and deeper the landscape differed dramatically, for there were huge rocks – striated with purple and pink veins. Cliffs surrounded us as we made our way. It was as if we were entering a primal place, filled with silence and inner concentration. The cell phones stopped working. We were alone, in the midst of a powerful environment.

The long road prepared us for the Monastery in more ways than one. The complex is built out of adobe and rock from the site itself. It blends into its surroundings literally as an extension of the landscape we had been seeing for over an hour.

Once I am in the church I feel bathed in light.  Indeed, as explained below, the light is streaming in.  There is a beautiful bouquet of flowers to enliven the space.  Then further back is the altar, as you can see in the picture on the upper right.  It is a majestic piece of art and reverence.  Once settled in a pew, I am able to appreciate the full space – by being surrounded by peace, sincerity and balance.

Please allow me to quote from Nakashima’s daughter’s book on him, “Nature, Form & Spirit”. Mira writes: “Indeed, the complex is a fusion of Eastern and Western design principles. For example the chapel is laid out in a Greek-cross plan-a distinctly Western form , to facilitate antiphonal chanting-while its thirty foot high clerestory windows on all four sides of the central altar area, create a traditionally Japanese inside-outside visual flow with tremendous impact on the interior space.”

With desert on one side, I could start to understand how so many holy people had gone to such a climate in search of wisdom. At first harsh, one needs to adjust and then is able to see the richness of life, the myriad colors that abound. Then, curiously on the other side, there is a stream that runs through it – creating green meadows filled with wildflowers and gardens of vegetables which are planted by the monks.

I go with my daughter to the gift shop which at the moment is overseen by a sleepy monk from the Philippines. We gather up many of the soaps which are made from local lavender and sage and an intriguing book of recipes from biblical times.

As we make our way back to Santa Fe in the late afternoon, we know we have been touched by something very special and precious. I am filled with gratitude.  For me it spans the world from Abiquiu to Pondicherry and a time from the 1930s until now.

The Monastery of Christ in the Desert is a beautiful integration of both.