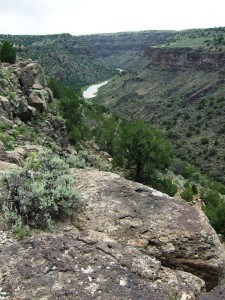 Taos is in the southwest of America. It is wonderful and wild and so very open. Outside of the the small town, there truly are large open spaces and blue sky that goes on forever. The green of the sage brush in the high desert is a wonderful color. Against the beige of the sand it seems to burst forth with life. 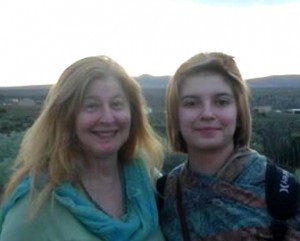 A group of about 80 people gathered here at the beginning of August. My daughter and I were 2 of the people who went west from the east coast while others flew in from Auroville in South India, Los Angeles, Colorado, Vermont, Lodi, California, NY state.

An ayurvedic center at AuroMesa had organized 4 days and nights of workshops, talks, an akoshic sound event in an old church with crystal bowls and a huge gong. Even nature collaborated with a full moon hanging lush over the night landscape.We go the Taos Pueblo, the oldest continuously inhabited community in the US for over a 1000 years. “The Place of the Red Willows” is a high mountain desert oasis at an altitude of 7,068 feet. 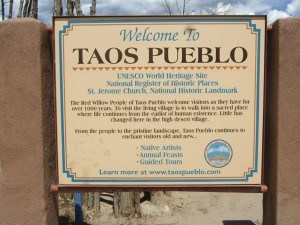 The Taos Pueblo was inscribed in 1992 onto The World Heritage list by UNESCO as The First Living World Heritage. It is also a National Historic Landmark, in the National Register of Historic Places and has Honorary Recognition in the American Architects Association.

Beyond all these titles is the sacred quality of the land. 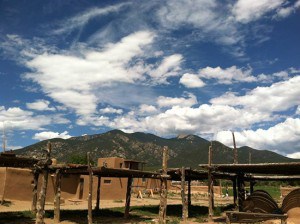 The ground exudes holiness and quiet.

Part of the Tribal Manifesto says, “We have lived upon this land from days beyond history’s records, far past any living memory, deep into the time of legend. The story of my people and the story of this place are one single story. No man can think of us without thinking of this place. We are always joined together.” As stated in the brochure, “Conservation and preservation of the Sacred Village and the Blue Lake Wilderness Area are of primary concert to the Taos Pueblo. The Pueblo’s goal is to maintain the area of over 100,000 acres in it’s most natural state – protecting trees, water, fish, wildlife, soils and land from damage.”

The recognition of land and spirit is a gift of the Native American to our time. As we know and see, we are at a time of climate change. The immediate need to stop and correct the widening footprint of humans on our earth is upon us now. The ancient wisdom of these people is a guidepost for all today.

Those of us attending the AUM take this seriously and there were several presentations on recycling, afforestation, water, and “earthships”, living spaces that use all “waste” in creative ways along with solar and wind energy. Even tires, glass bottles and tin cans can be used for installation and decoration.

Rejuvenation of the self through healing and the rejuvenation of Mother Earth through conservation were dominant themes, along with the aspiration of the attendees to grow in the spirit based on the teachings of Mira Richard and Sri Aurobindo, world personalities who were able to go beyond their individual lives to incorporate a planetary view of unity and an evolution of consciousness.

We danced to music – some of it from drumming, some from world fusion – while a beautiful woman did classical Indian dance. People were remembered who had passed over while the younger people brought a new perspective to intuition, art and walking to the Rio Grande.

At the closing circle, I mention George Nakashima and that he was the architect for a monastary near Taos, just north of Abiquiu. (More about this in my next blog.) He had been given the name of Sunderananda, one who delights in beauty, by Sri Aurobindo in 1938. The grace is everywhere. 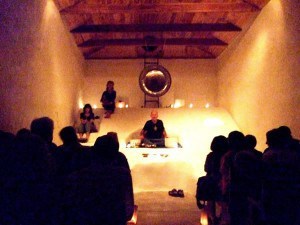 When some wonderful music is put to the final chanting, I can no longer contain my gratitude and lead the group in joyous dancing.

It seemed as if we were transported to a world of old Native time when the mystical easily slipped through the everyday and everything is charged with wonder and awe.