The day that Mrs. Ban, spouse of the Secretary General of the United Nations, and other ambassadorial spouses and delegates from various missions visited the Nakashima Studio, was delightful. The beginning of November in the Northeast was mild and sunny, truly an Indian Summer. Everyone enjoyed being outside and walking around the grounds to see the various buildings and appreciate the landscape. 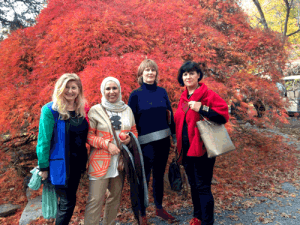 On the 1st friday of the month the trees still had their leaves of golden yellow, orange and red. The sun came through the clouds and all glowed.

I was so very grateful that the HCUND, the Hospitality Committee for United Nations Delegations, arranged the trip. A small bus brought the many women from NYC to New Hope, Pa. Mrs. Ban and Miri Kim Oh, spouse of the South Korean Ambassador, came in her car for security protocol. 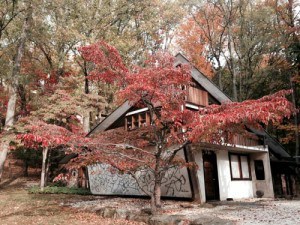 Once everyone gathered together in the Conoid Studio, it was laughter and excitement as they were busy taking lots of pictures of the place and the beautiful furniture that Nakashima and Mira had designed. Mira gave a short history of George’s life. We then divided into two groups since there were so many of us. Ru, Mira’s son, took one while Mira gave the tour to the others. Mira’s husband, John Yarnell, helped and shared stories. Kevin, Mira’s brother, also shared stories and regaled the women. We go to see the Wood Shed which holds a huge amount of woods from all over the world. Then onto the Mountain Villa with its precious tea room. Finally, we walked down to the Arts Building to reconvene and have lunch.

Doing a most remarkable job behind the scenes was Soomi, Ru’s Korean wife. She had met Mrs. Ban Soon-taek in January at the luncheon at the Metropolitan Museum of Art and the 2 women had warmed to one another, speaking Korean and realizing they knew people in common from their country! Soomi was especially capable in making the Korean women feel at home. Indeed, she helped everyone feel well taken care of for she also organized a sumptuous buffet luncheon. Mme. Hilale graciously brought Moroccan sweets that were a delicious surprise.

Once we had eaten and admired the building which has been given to the Nakashima Foundation for Peace, I spoke about the Foundation and then shared a meditation with the group. It had just been the UN’s 70th Anniversary on October 24th. Its UN blue color lit the NYC headquarters and more than 275 iconic buildings and monuments in nearly 75 countries across the world. I also used the color, asking the women to visualize it encircling the globe in peace. Everyone was open to being part of the prayer. 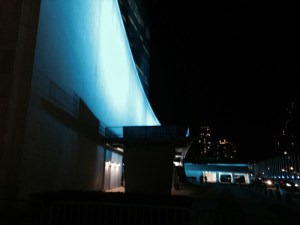 I shall always remember the day since it was the culmination of a deep aspiration – and also my birthday. My daughter was even with me since
she had no school. 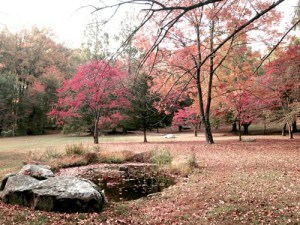 The universe had given me an extraordinary and special present.

A most humble thank you flows from my heart*

May you also feel a deep gratitude at this time of Thanksgiving for the universe’s presents to you!