July was filled with experiences of a global reach while locally on the east coast of America.  The heat and humidity remind me of Auroville, that melting pot of the global future in South India, where everything just melts away except for sincere aspiration.

Starting off though on June 30th, I gratefully shared a workshop entitled ”Experience Your Personal Oasis at Greenwood Gardens — Tips and Tools to Cultivate Your Inner Calm” My colleague, Melissa Brown, MD, CPC and I took advantage of the beautiful environs to use a gardening theme as we led a 2 hour experience.  The participants were in for a treat, especially since we were able to go outside and do a mindfull walkabout in the midst of roses, butterflies and vistas of blue sky.  Here are some of us standing in the Gardens.

Then at the beginning of July, China came to NYC as my amazing friend Madame Lu Hailin visited over the 4th of July weekend.  Elizabeth Brown and I hosted a luncheon for her at La Chine, a new restaurant at the Waldorf Astoria.  She loved it, as did all of us.  The food was a fusion of British High Tea and Chinese Dim Sum while the menu was also in English and Chinese.  She is a joy to be around and very much enjoyed seeing her friends from NYC and sharing her wisdoms with us.  We all sat enthralled as she spoke of health and the perks of going older.

On Tuesday she continued this theme at a friend’s home where others and I gathered again for a final time together. Allow me to paraphrase her as she delineated a person’s life: Up to 20 we are studying, then 20-40 career and family, 40-60 gathering awards and teaching, 60-80 enjoying life, taking care of health, wise and dignified. Perhaps now we need to extend it to 80-100 years of life. Does any of this ring true for you?

A mere two weeks later I was a facilitator at The Ledgewood Retreat: Mindfulness, Happiness, Movement and Meditation. Meera Gandhi, the organizer, is the founder of The Giving Back Foundation, a nonprofit, which helps women and children globally. Delicious Indian food was served for lunch. The top picture is of her, Inga Benson and myself.

This photo is fun though it only shows a fraction of the audience. They were all smiling and laughing as I began my presentation about the importance of chakras in daily life. People from a variety of professions and with a variety of physical agility – there was hatha yoga and dancing – participated in a magical day.  The weather was hot and sunny which was a blessing since we wanted to have it outside.  There was always a breeze and the view of the Hudson River was cooling.

Meera has 3 remarkable children.  Her eldest, Kiran, is here with Maddye.  Kiran is a musician, the drummer for MIA, and a feminist.  She is courageous!  In August 2013 People Magazine had an article titled: Runner Defends Letting Period Bleed Freely at London Marathon: ‘Women’s Bodies Don’t Exist for Public Consumption’ “If we don’t own the narrative of our own bodies, somebody else will use it against us”  says Kiran Gandhi.  Knowing this, Maddye had given her a cloth pad that can be washed and reused which she had gotten in Auroville.  Just before this picture was taken, Kiran had performed.  We were so inspired by her music that we spontaneously gifted her with a special beaded bracelet.  It is made by Tamil women in a design studio that has existed since 1985 in AV.  She loved it and immediately wore it.

Here are some words from Sri Aurobindo which seemed especially appropriate for this day of Eastern wisdoms and Western technology at a US National Historic Site: 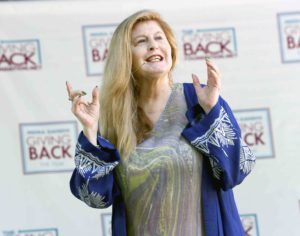 “East and West have the same human nature, a common human destiny, the same aspiration after a greater perfection, the same seeking after something higher than itself, something towards which inwardly and even outwardly we move.”

As we all were fortunate to have this experience  in such a peaceful place, I felt compelled to also reach it out and have all of us send light and peace around the world.  The attack in Nice, France had just happened.  As we now are witness to more and more violence, it is crucial for us to remember that we have chosen to come, to be born, at this time to help in the evolution.  We need to sink into our light and then send it brightly to those in need.

Indeed, here are two quotes which also are relevant for now.

“Our deepest fear is not that we are inadequate. Our deepest fear is that we are powerful beyond measure. It is our light, not our darkness, that most frightens us. Your playing small does not serve the world. There is nothing enlightened about shrinking so that other people won’t feel insecure around you. We are all meant to shine as children do. It’s not just in some of us; it is in everyone. And as we let our own lights shine, we unconsciously give other people permission to do the same. As we are liberated from our own fear, our presence automatically liberates others.”  – Marianne Williamson

“There is no passion to be found playing small – in settling for a life that is less than the one you are capable of living.  It’s tempting to play small. To just settle and take it easy. It would definitely be easier, at least in the short run. Because going after what you really want demands so much time, effort and possible pain along the way. But it’s also there where you grow and can live fully.

While playing small might be easier it also comes with nagging thoughts at the back of your head that say “Is this all there is? Could I have done more?”. Taking the tough road is of course harder in many ways. But it is also there you find the truly awesome triumphs and wonderful times that you may never have experienced otherwise.” – Nelson Mandela

The above quotes are also my response to the wonderful comments to my new Facebook photo which you can visit@ www.facebook.com/miriam.belov

Twenty years ago this month my father, Mathew Klein, dropped his body.  It was a shock and great sadness for my mother, siblings and myself. He had often said that he wanted to live until he was 80 and he did.  His death occurred when he was 80 years and 7 months old.   My father was a most remarkable man: the first to go to college he stretched his orthodox religious upbringing to that of intellectual inquiry.  Mathew was a thinker and a scientist.  He was ahead of his time with his environmental concerns.  He was also a compassionate human being with love for his wife, children and a defender of liberal ideals.  My father was a deeply spiritual man who cherished life and saw its wonder in the smallest microbe and the discoveries of the 20th century.  Here is the poem I wrote and read at his funeral.  The picture below is of my father Mathew and me.

With a kiss from God, Mathew arose.

May our prayers give flight to your soul in its upward journey.

May those who passed on before you bless your spirit towards them.

As you glide in peace, towards peace

Your parting is a holocaust for us but we find solace in its grace.

For it was a good day to die for you.

Surrounded by our love you left us in a gentle parting.

No pain.  No suffering. Just a calm sleep.

Your holy life earned you this holy release/this ultimate healing:

As passionate as your wife’s embrace,

as your grandchildren’s smile,As tender 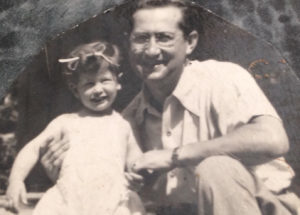 As compassionate as your children’s touch.

In every act of goodness, in the glow of each candle’s light, in every scene of beauty,

In all that is good and wise and true we see you alive.

Reborn forever in our hearts.