Being at the United Nations’ Headquarters in NYC on March 7th for the UN Women for Peace event felt a bit differently than being in Auroville in South India just a month earlier for the Nakashima Sacred Peace Table Dedication.  The formidable surroundings of the UN building, the view over the East River, the Delegates’ Dining Room filled with sophisticated women, some more “famous” than others , were all familiar and yet, at first, a bit overwhelming. But here I am with a lady I know: the very famous, brave and gracious Mrs. Ban  Soon-Taek, the spouse of the Secretary General. 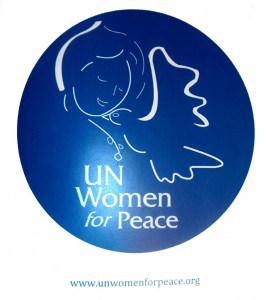 Having just spent 16 days in the UNESCO recognized international township – famous for its advances in sustainability, afforestation, working with the indigenous Tamil people – it was a bit of a stretch to even be in Manhattan.  In Auroville, the buildings are barely seen since they are intentionally built to blend in with the surrounding trees and high hedges of tropical foliage.

The center of the “city” is the Matrimandir, a place of concentration with the largest made crystal in the world from Zeiss.  It is in a serene green park with a huge ancient Banyan Tree next to it.  Hibiscus, orchids and even some roses grow around the perimeters.  Flower gardens are about to be planted.

One ascends up carpeted ramps and finally reaches the circular Inner Chamber, all white marble filled with stillness and beauty as a ray from the sun descends through the opening in the roof and the crystal.

I was filled with the spirit that is palpable there.  I had gone to bless the dedication of the Peace Table, a joyous moment.  It was at the beginning of my sojourn and so I was able to often rest in that vibration and the grace of the Matrimandir’s.  Of course, spending a few days at a healing spa/community next to the ocean helped also. 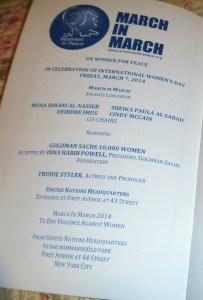 As I made my way into the city on March 7th, I could feel my gratitude growing to be involved in another peace event so soon.  Of course, it was different but there was a similarity between the two: an aspiration for peace, harmony, unity and justice for all. The outer personalities of the people were varied.  The inner sincerity was the same: each doing what she could do in her own way, adding momentum towards an evolved future.

Yes, now it was cold and I was dressed warmly in a woolen suit with the peace symbol discreetly painted on one of my fingernails.  The thin silk chiffon scarves and delicate cotton dresses were packed away. No one was able to see the orange polish on my toenails which had always been visible in the warm clime.  My outer clothing had changed but I was the same being internally.

Suddenly I realized that I was having fun making the stretch from a peace event in South Asia to one in North America!

As George Nakashima has said, “…Enthusiastic contagion would be useful, as peace the world over is uppermost in our consciousness. It must be a joyous peace, not a fear or absence of war. It is a question of surrender. A surrender to the Divine Consciousness to end in a most beautiful aura of love.”

The women at the UNWFP luncheon and march were all powerful .  Many were in the diplomatic corps, others led successful companies.  Those honored had done remarkable things and achieved positive changes in the world for other women.  It was a privilege to be present at the United Nations in the midst of the busiest city on the globe with the adjacent rose garden about to bloom in the upcoming months.